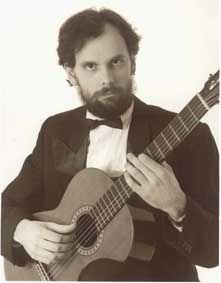 Algimantas Pauliukevičius was born in 1965 in Vilnius. From 1975 to 1980 he studied at Vilnius 4th Music School and in 1980-1984 at the Vilnius Conservatoire. All these years he was taught the secrets of the guitar playing by one of the pioneers of classical guitar in Lithuania - Sigitas Šilinskas. It was this man who shaped his playing style, manner and attitude towards music. Later, Algimantas studied the art of the guitar in the Belarusian Academy of Music (lecturer E.Gridiuška), and after returning to Lithuania, he graduated from the Music Academy in 1991 (taught by J.Kurauskas). In 2000, he won first place in the International Guitar Competition in Italy. Being an active propagator of classical guitar, he has been developing educational programs for children and young people, has participated in Lithuanian television and radio broadcasts, made fundraising records on the Lithuanian Radio. Since 1996 - he is the Chairman of the Board of the Lithuanian Classical Guitar Club "Motus Recto".

2006 - President of the association Motus Recto. From the time of his studies he has combined pedagogy and concert activities, as well as social activities. However, in the 2000s, he decides to abandon teaching and, in 2004, becomes a freelance artist. His educational program is a frequent guest at secondary and music schools. Since 2008 he teaches in the YAMAHA music school. His pupils have repeatedly won the prizes in international and nationwide competitions.